My Blog has moved!

I am now using Wordpress to host my blog on Dragonflies & Damselflies of Singapore.  Please click here for future updates.  Thanks!

Gunung Belumut Recreational Forest (GBRF) is a protected forest in central Johor.  It is located about 30 km north-east of the town of Kluang.

I got to know about GBRF only recently when Mr Tang Hung Bun, an odonata expert, shared with me a video (see below) of the Green Metalwing damselfly that he recorded at this place.  He said that he enjoyed very much the dragonflies there.

This got me excited and I requested Tony to do a recce there with the intention of organizing a formal macro outing for members of Nature Photographic Society, Singapore.  So， 5 of us (Tony, Allan, Ong, Foong & I) set off early in the morning  on 16 July 2011.  It was about 7.30 am when we cleared the custom at Tuas second link.  We drove towards Kluang and had our breakfast at a coffee shop called "老巴剎“.  We reached GBRF at about 10.30 am. 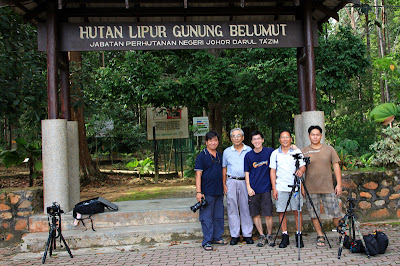 There is a big forest stream on the right side near the entrance of GBRF.  The water was clean, moderately flowing, shallow with many small rocks underneath.  However, at some areas, the water can be above knee level deep.  From my experience, such habitat is an ideal place to find interesting and rare damselfly species.

It did not disappoint.  Immediately, a male Euphaea ochracea was spotted perching at the edge of the stream.  Not too far away, perching on the rocks in the middle of the water were a few beautiful Green Metalwing, both male and female.


It was a big wide stream which can easily accommodate many photographers at one time.  As we moved around the stream, many other damselflies species were spotted.  There were so many of them that there is no need to queue up to shoot.


After spending more than 3.5 hrs at this stream, we stopped for a short break at 2.30 pm where we ate breads as lunch that we bought at the coffee shop earlier.  All of us were tired but happy with what we had photographed.  As it was still early, we decided to walk further up the stream hoping to find more interesting subjects. 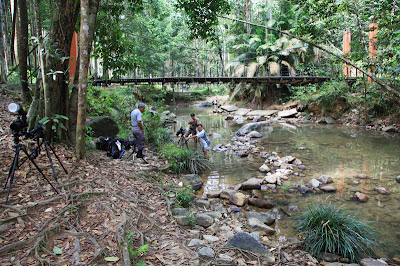 (Another steam further away from the entrance)


Dysphaea dimidiate is a large damselfly species, classified as extinct in Singapore. The males have dark purplish colour on its body and half of its wings but when seeing it from afar, it looks more like a black damselfly. The females are said to have brownish yellow marking on its thorax and they are rarely sighted in open areas. The males are normally found perching on rocks, branches or falling logs in clear forest streams. When doing a search in the internet, I could find a handful of male images but not a single image of the female.

My first sighting of a male was at Endau Rompin in August 2010. My impression then was that it is a skirtish species but when we spotted it recently at Gunung Belumut Recreation Forest, it was fairly cooperative. Most of us managed to get some decent shots. I notice that the male likes to perch under hot sunlight. It would, sometimes, open and close its wings while perching as if to suntan its wings. When doing so, it really looks a little like a true dragonfly.

The female D. dimidiata was on my wishlist since last year but what I saw was totally unexpected. A female came from nowhere and suddenly my photography buddy suddenly shouted with excitement “Hey, they mate!”. I turned around and I saw the mating pair perching on an unattractive fallen branch not too far away from me. The lighting was harsh but guessing that the mating may not last long, I did not bother to get something to block the strong sunlight. True enough, the mating lasted only about 3 minutes. 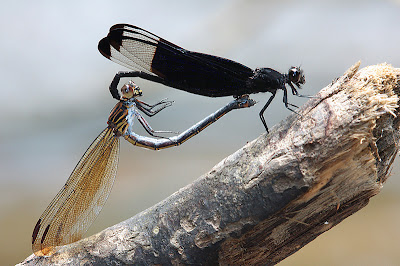 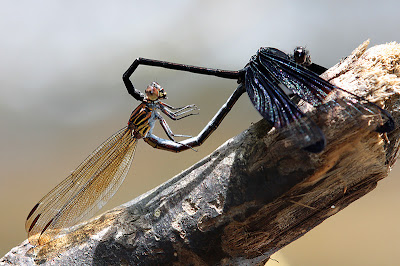 (The male opened and closed its wings even during mating!) 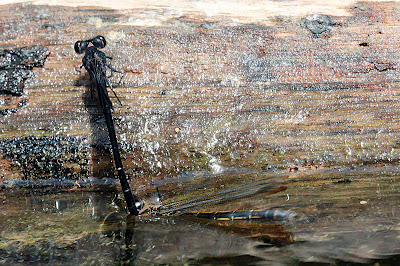 (Male pushed the female under the water)

Thereafter, the female submerged under the water for about 3 to 4 minutes to ovipositing while the male stayed  above the log to guard from any disturbance by rival males.  It is quite common to see female laying eggs above the waterline or at the waterline but this is the first that I saw egg laying below the waterline!  Truely amazing! 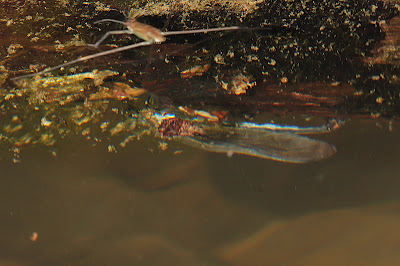 (Female laying eggs under the water)
Posted by Anthony Quek at 12:16 AM No comments:

We have two Vestalis species in Singapore namely V. amethystina & V. amoena.  Both look almost identical with metallic green colouration and they have attractive clear wings that can sparkle with purplish iridescence when photographed at a correct angle and with fill flash.  V. amethystina is a common forest species in Singapore but V. amoena is classified as uncommon.  V. amethystina is frequently found in the vicinity of clear forest streams whereas, V. amoena is often associated with large forest streams. 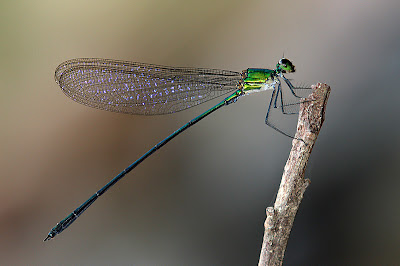 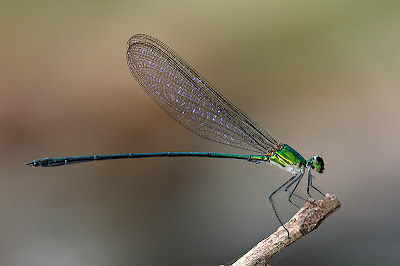 This is a large damselfly species usually found at moderate to swift flowing clear forest streams or near waterfalls.  It likes to perch on stones or fallen logs in streams.  Such habitat, unfortunately, can no longer be found in Singapore and therefore, this species is believed to be extinct nationally.  Accordingly to Dragonflies of Singapore book, it was last recorded in a stream at Upper Macritchie in 1970.

The males have transparent forewings and attractive metallic green hindwings.  When in flight, the male looks like a beautiful butterfly flipping its brilliant metallic wings.  It is one of the most stunning damselflies that I have seen so far.  The female is a little less impressive than the male but still attractive to me.  It has amber coloured wings with white wing-spot.  Both the males and females have metallic green thorax and abdomen.

This damselfly is considered a common species in Malaysia.  Both the male & female were photographed at a stream near the entrance of Mt. Ophir Recreation Forest. 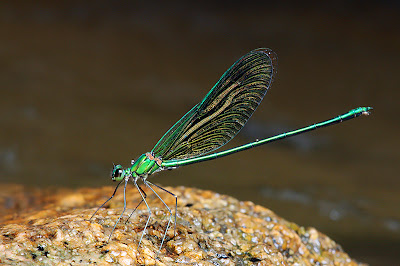 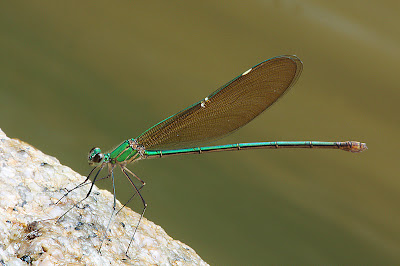 Posted by Anthony Quek at 7:39 PM No comments:


This species is classifed as common and widespread in Singapore.  But strangely, this is my first sighting of a male, Potamarcha congener at a wasteland near Jalan Bahar.  I have not seen anyone else photographing it except in Mr Tang Hung Bun's Book.  A skittish species and I had to put on my 2xTC to get this record shot.  It flew off after a few shots. 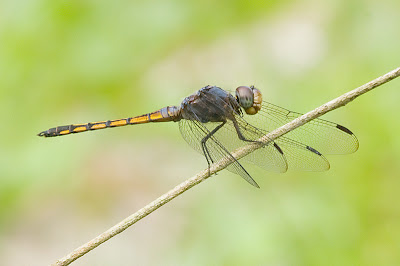 (Male, Jalan Bahar's Wasteland - 14 May 2011)
I saw my friend photographed this species, both male and female, at the recently opened Tampines Eco Park and decided to try my luck.  To my surprise, there were quite a no. of males & females perching near 3 small ponds.  The females were relatively cooperative and I am happy to get some decent shots. 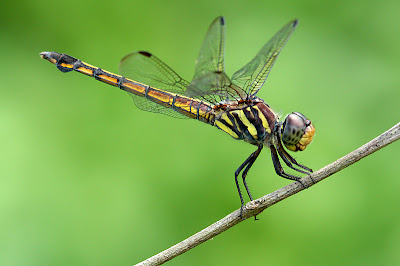 (Female, Tampines Eco Park - 2 June 2011)
The males were again skittish but I could approach a little closer this time compared to my first encounter.  Still not a good shot but I am confident that I would get improvement shots when I visit Tampines Eco Park again! 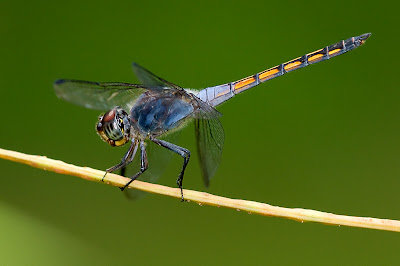 I am happy to have finally photographed a male, Amphicenis gracilis. Typically of this species, it perched near a small pool of smelly muddy water under very dim surrounding.  It was pretty tough shooting in such poor lighting condition especially this damselfly is highly sensitive to the use of flash.  As such, most of my images are captured without flash such as this one: 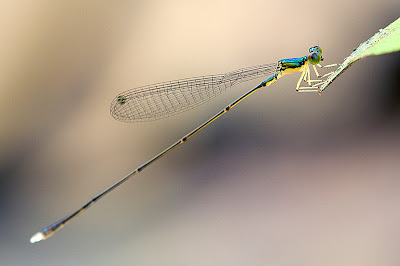 (Lornie Trail - 21 May 2011)
The following image is the only acceptable shot with flash: 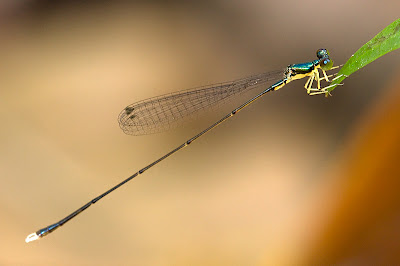 (Shot with fill flash)
I will certainly revisit this place to get improvement shots as well as close-up.
See related posts:
16 - Amphicenis gracilis
16a - Improvement shots of a pretty immature female, A. gracilis
Posted by Anthony Quek at 2:02 PM 1 comment: