Lestes Praemorsus is an uncommon species, first recorded in Singapore in 1997. It is known to be occured only in Macrichite Reservior. It is a medium-sized species which rests with its wings half-open. It has a unique hockey stick-shaped rather than straight obdomen. 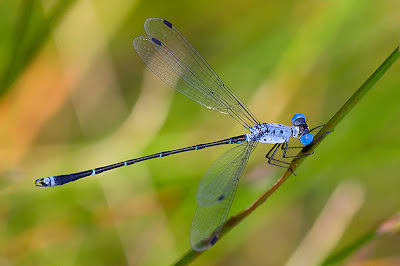 (Chestnut Ave - 2 Nov 2009)
I went to Macrichite Reservior to search for this beautiful damselfly on 2 occasions but could not locate it. When Dairy Farm Nature Reserve Park was officially opened on 5 Sep 09, a picture of this mating damselfly was featured the next day in the Sunday Times. I went to Dairy Farm to try my luck and I was glad to have spotted a female perching just above the water at the Quarry. I could only take a record shot of it from a distance as we are not allowed to go down to the water. I hope it could perch in a better place during my next visit so that I could take an improvement shot. 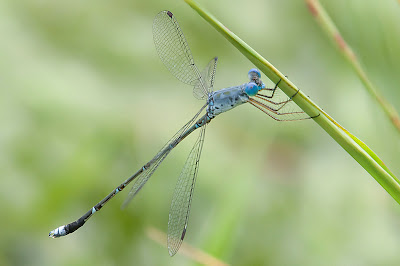 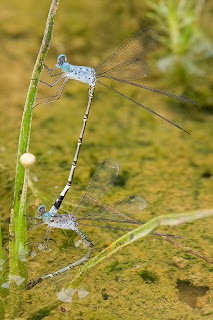 I read that this species has since been found in several other places such as Pulau Tekong Reservior, Upper Seletar Reservior, etc. My friend, Eddy Lee, had recently photographed one at Chestnut Avenue.  He told me the exact location where he found this species and I am happy to get a slightly improvement shot of it.
I saw this species photographed by a new found friend, Federick Ho, at Lornie Trail.  He directed me on where to find this species.  I went there on 14 Aug 2010 and there were about 8 nos. perching lowly along the edges of Macrichite Reservior.  Got some shots but still plenty of rooms for improvement.
On 6 Sep 2010, I was happy to spot a mating pair where the female was laying its eggs into the water.
Posted by Anthony Quek at 8:54 PM