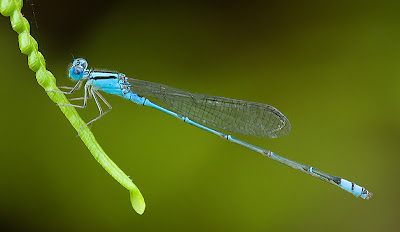 (Male - Lornie Trail, 23 Aug 2010)
This blue sprite damselfly is a beautiful species which is commonly found in ponds and open streams. The male is characterised by an overall bright light blue colour with black stripes on its thorax. The female is light brown with obscure greenish markings. The males are more commonly seen than the females. 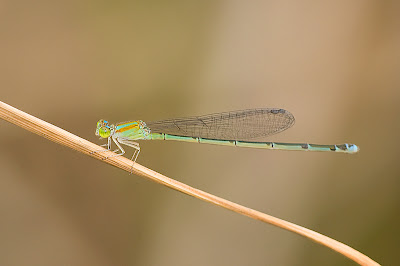 (Female - Dairy Farm Nature Park, 25 Apr 2010)
Surprisingly, despite such a common and attractive species, I don’t see many of us photographing it. The reasons could be that they are not an easy species to approach and their habits of perching very lowly in the streams making it difficult to shoot. I personally have seen them many times in Singapore Botanical Gardens and Jurong lakes but have ignored them until recently when I decided to make an effort to shoot it when I spotted many of them in a small stream at Venus Drive. I was lucky to find a mating pair but didn’t have a good shot as the ground and lighting conditions were not ideal. 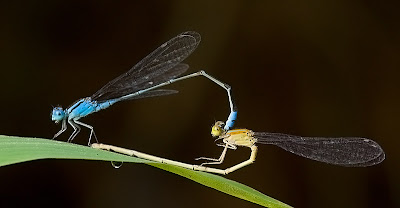 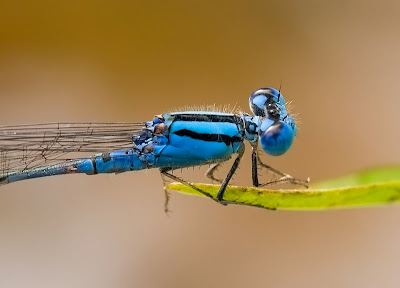 (Male closeup - Venus Drive, 13 Feb 2009)
My recent sighting of this species was at Lornie Trail where there are plenty of them.  I was fortunate to capture a mating pair at the edge of the nearby reservior. 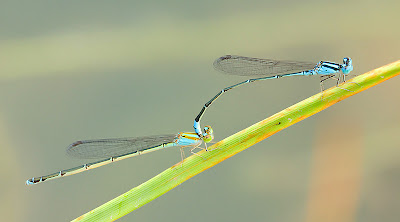 Hi Anthony,
I just visited your blog today, and I think your photography is simply awesome, with really crisp colours and sharp details amply doing justice to the wonderful creatures that we admire!

Thanks for visiting and commenting on my posts.

Thanks for your kind comments. I found your website when I searched the internet for ID and information of Odonata. I know little of dragonflies and damselflies but through your blog and other odonata experts, I now have better knowledge of these beautiful creatures. There are about 117 species in Singapore and my target is to collect at least 50% of the species by year end. I am a follower of your blog and looking forward to see more different species from your country :D