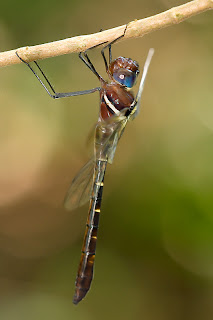 According to the Book on Dragonflies of Singapore, this is a huge dragonfly which can be seen flying along forest trails near swampy areas.  It is a rare species which is knowm to be found at MacRitchie Resevior.
They have beautiful bluish-green eyes and there is an unmistakable whitish band on the side of its thorax.
I was glad to spot this dragonfly hanging on a tree branch when I went with 2 friends for odonata hunting at Lornie Trail yesterday.  The eyes of this dragonfly are more bluish in colour and my guess was that it should be a female which was later correctly confirmed by Mr Tang.  It was quite cooperative and I managed to take both the dorsal and side views.  Unfortunately the sunlight was harsh and I couldn't get a good shot of the dorsal view ie. the bright branch in the background is quite distracting.

Having said that, I am still happy with what I have as it is my first dragonfly post in 2011! 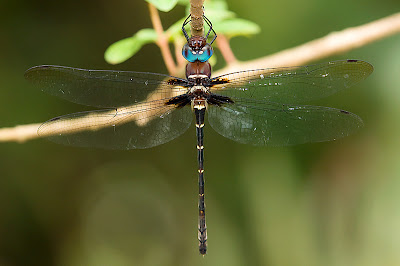 Hi Anthony, I am a new member and congrats on capturing this rare dragonfly.
Cheers, leonard.

Thanks for dropping by. Glad to see another singaporean interested in photographing dragonflies & damselflies. Hope you fun shooting them just as I did :D

Thank you Anthony. Your blogs really motivate and inspire me to photograph odonata in Singapore.
Cheers,
Leonard

Hi Anthony,
What a rare capture! Although I've started actively photographing Odonata since 2005 I still haven't photographed a Corduliid yet! I've only seen them fleetingly a few times, even though there are over a dozen species recorded in Borneo!
Your shots are superb!
Joe