Family : Libellulidae
Common Name : Dancing Dropwing
Status : Uncommon
Location : Dairy Farm Nature Park, Lornie Trail
This is a medium sized yellowish brown dragonfly with relatviely long legs.  The male and female have similar marking. However, the face of male is metallic purple while the female is rather yellow white in colour.  It likes to perch in the open with its wings nicely folded up which make it easier to photograph.  It is a cooperative dragonfly and not difficult to get nice backgroung.  The challenges are the harsh sunlight and strong wind. 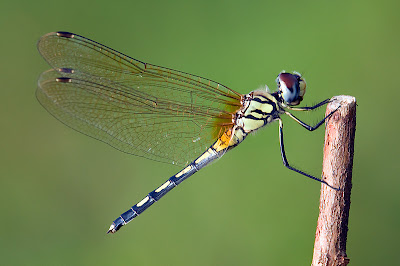 (Female - Lornie Trail, 14 Aug 2010)
My first sighting of this elegant species was at Dairy Farm Nature Park a few months ago. I could not get any shot at that time as it was perching in the water, a distance from the board walk. I am glad to spot this species again this morning at Lornie Trail.  A little disappointed as I did not handle the harsh sunlight well.  I will definitely revisit Lornie Trail to get some improvement shots in the coming weeks. 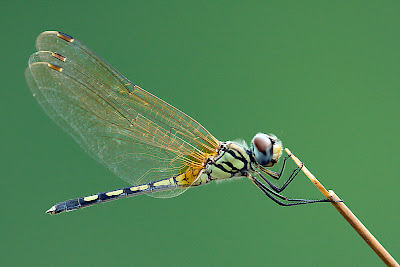 (Female - Lornie Trail, 16 Aug 2010)
I revisited Lornie Trail 2 days later and I spotted about 4 to 5 nos. of this species perching near the edge of the reservior.  This lighting was better this time but it was as windy.  The green background in the above picture is the water, a lightly better shot, in my opinion.  I shall revisit this place soon :D
Posted by Anthony Quek at 8:53 PM

It's a beauty, very nice shot.

Thanks for your kind words!